Use Case: Merging IT Systems

Fresh from her success managing project risks, where Jane gathered and organized risk information on projects across Acme Corp globally, she was given a new challenge…

Identify IT Overlap and Savings

AcmeCorp and BigCo had announced their intention to merge the two companies, subject to approval by the competition and regulatory authorities. Their industry is heavily reliant on IT systems. A key assumption underpinning the economics of the deal is that major efficiencies can be found by moving the merged company onto one set of IT systems.

Jane has been assigned to an IT taskforce planning which systems the new merged company would use, and how the migration should happen.

Because the merger has not happened, there are some very strict confidentiality requirements in place for both companies. 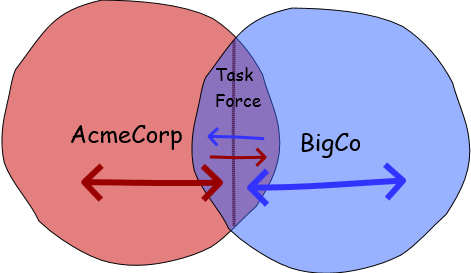 The taskforce decided they must first complete an inventory of both company’s current systems. They agreed a key set of information they would need for each system including

Jane’s counterpart in BigCo, Brian, suggested they jointly build a spreadsheet template to collect the information. This way it would all be comparable between companies and they could put the spreadsheet together right away. Brian was used to dealing with spreadsheets and was confident this would be the easiest way to proceed.

Jane agreed they needed a consistent approach in order for the systems inventory to be useful and trusted. But she then explained the problems she had previously encountered when using spreadsheets for data gathering exercises

On reflection, Brian agreed he had often experienced the same problems when sharing spreadsheets with other people.

They briefly considered using an online spreadsheet as used by millions of consumers worldwide, but quickly discovered that would not meet either company’s security requirements.

Jane explained how she had used LiveDataset before. She thought it would be ideal, the taskforce could work off one consistent view of all the current information in real-time. They could set up access rights so that

Brian watched as Jane quickly created a new dataset for the Systems Inventory and added some of the Acme Corp systems she was familiar with. She gave Brian access and he added a few Big Co systems and they could see this was going to work well.

Jane and Brian organized their IT departments to complete the information in just a few days.

The process of collecting this systems inventory was straightforward and boosted trust in the merger process. Which they hope will help them as they decide which systems to keep and which will be ‘sunsetted’.

more…
We use cookies to ensure that we give you the best experience on our website. If you continue to use this site we will assume that you are happy with it.OKRead more